The Battle of the Holgas 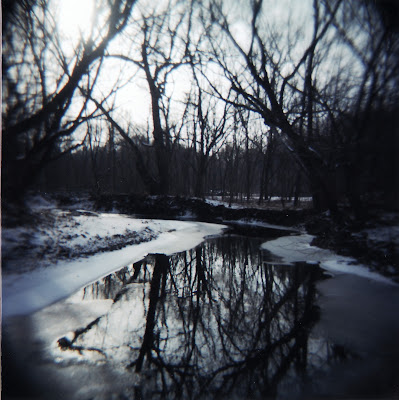 I don't know if muscle memory is the proper term for it, really...learned behavior might be a more accurate description of my tendency to err on the side of excess by taking about a million pictures of (essentially) the same subject - in order to ensure that I get the desired shot. Since stepping into the lo-fi photography arena, one of my greatest challenges has been in training myself to be stringent about dedicating only one frame to each subject. Which can be a bit tricky - because without the convenience of reviewing pics. as soon as they're snapped, in order to make adjustments to angle, composition, what have you - Holga photography is a bit of a crap shoot, a gamble if you will - and I havta say, I do love that element of surprise. Since there is no delete button when shooting with a film camera, there are also no second or third or millionth chances to manipulate the outcome of any one photo. What I find, is that whenever I fail to totally commit to a particular shot - the resulting photograph is anything but remarkable. And so I'm learning to be more deliberate when choosing and setting up my shots, and if I don't feel strongly about whatever it is that I'm viewing through the window - I hold off on clicking the shutter until I come across something that I deem more worthy. 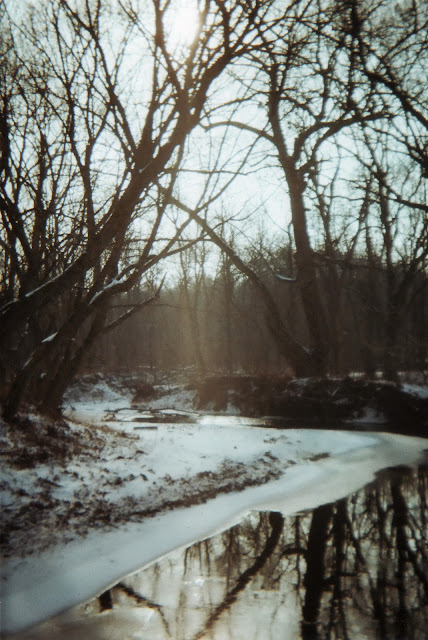 Clearly I can contradict myself though, because for some odd reason - I took two...whole...pictures of this icy, winding creek. I honestly can't even tell you why I did it, but I wasn't entirely bummed that I had, because what I'd inadvertently done - was afforded myself the opportunity to put my two Holgas in the ring to duke it out.

If you ask me, Holga 120 earns the title as the undisputed champion. I am personally partial to the way that her pics. lean more towards the blue/gray/black end of the color spectrum, and the whole "square" thing to me - is nearly impossible to beat. Although I do actually prefer the composition of the 4 x 6 photo of the creek - there's something about the amber/brown/beige tones (of most of my Holga 135 color pics., actually) that verge on being displeasing to me. 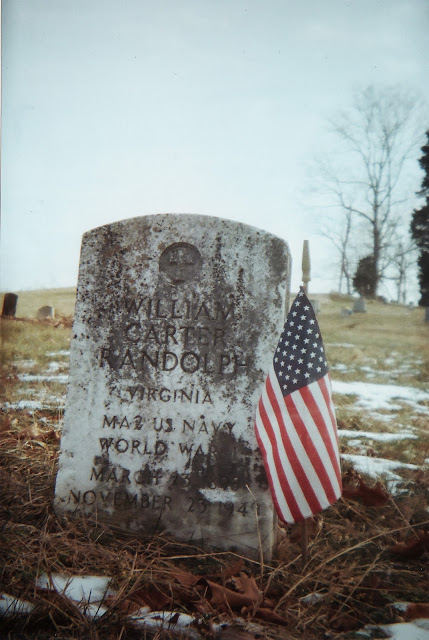 This photo and the one below, were both taken at the same cemetery on the very same day - and once again - Holga 120 gets my nod. Overall, Holga 135 pics. feel more amateurish to me...sorta snapshotty...borderline pedestrian...and sometimes even totally pointless. That could be because they lack the patinated charm with which the 120's have the ability to make even the simplest of subjects seem special... 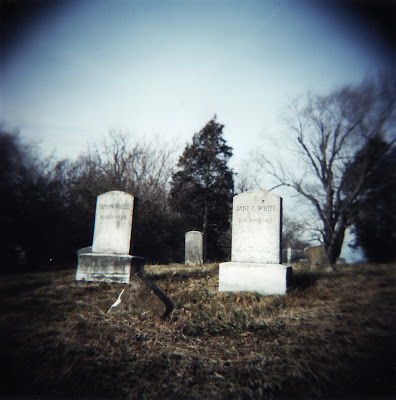 One more thing, and then I gotsta git...It's somewhat surprising to me that my success rate when using the 135 is way below that of the Holga 120. For each roll of 35mm film - I have 26 - 28 chances to take pictures which I hope just might maybe make me happy. But out of those 26 or so attempts - there are rarely ever more than say 3 - 5 photos that I can stand even a tiny little bit. However, out of the 12 possible frames of 120 film, (unless I've done something silly like accidentally switched the camera to nighttime mode...which does happen, believe me) I am generally satisfied with about 75% of the pics. that I get back.

Right so, my official decision following the battle of the Holgas - is that the 120 handily beat the 135, by technical knockout - so there ya' have it. Stay tuned though, cuz you never know when we might stage a rematch...
Posted by Big Ugly at 8:16 AM